Louise founded and manages the day-to-day operations of CRC. A state and federally licensed rehabilitator since 1985, Louise has substantial experience in wildlife rehabilitation, has participated in all the Skills Seminars offered by the International Wildlife Rehabilitation Council (IWRC), done short externships at the Raptor Center at the University of Minnesota School of Veterinary Medicine, completed the radiographic certification class required by the state, and worked closely with local veterinarians on wildlife cases.

She has substantial non-profit administration experience, including four years as president and/or executive director of a general wildlife rehabilitation organization which, during her tenure, saw a 15-fold increase in average annual income, an increase in annual patient load from 100 to 2000 animals, and established a central care facility. Ms. Shimmel has nearly 30 years experience in presenting educational programs for all age groups.

Her BA (Stanford) in Drama & English and an MBA (University of Chicago Graduate School of Business) in finance and accounting have both helped in her non-profit work. She also has several years of business experience including four years as an international commercial banking officer for one of the nation’s largest banks; as well as substantial writing and editing experience.

Louise served for seven years on the board of directors (two as president) of IWRC, the primary professional association in the field; served for fifteen years as the assistant or an associate editor of The Journal of Wildlife Rehabilitation, for five years been an instructor of IWRC’s Basic Skills class, teaching classes in the western US and Canada; and has presented conference papers and authored articles on emaciation protocol for raptors, blood transfusions, and other topics; and authored a chapter on raising neonate hawks and vultures in Hand-Rearing Birds, edited by Laurie Gage, DVM, and Rebecca Duerr, DVM. Locally, Ms. Shimmel was co-founder and first president of Oregon Wildlife Rehabilitation Association, and assisted the state Department of Fish & Wildlife to improve standards for wildlife care by re-writing the state licensing exam. Louise started and manages RaptorCare, an email listerv for raptor rehabilitators worldwide, with some 500 participants from 23 countries. She was awarded the 2011 Lifetime Achievement Award by the National Wildlife Rehabilitators Association. 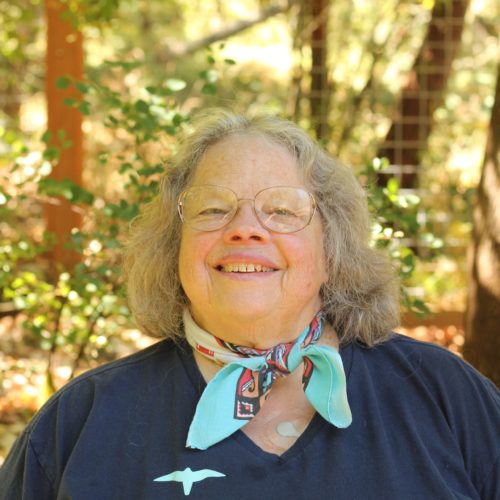